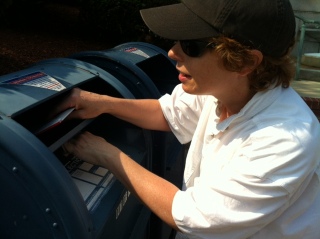 Packet #1 is wending its way southward, even as we speak1 and I’m having the expected let-down: everything could have been better. I expect to feel this way a lot over the next two years. It’s hard on my grade-grubbing, perfectionist little heart to have sent things that I’m not thrilled with, even when I know it’s probably good for me.

When I’m blue about the state of a poem, especially in the early innings, I go looking around the internet for early drafts of Elizabeth Bishop’s magnificent One Art. You can see, in those early versions, the glimmer of what is to come and why the poet was excited about this material. But you also see how flat and prose-y it starts out, how it’s a lousy first draft just like anybody else’s lousy first draft. Just like my first drafts. And I smile, because if even freaking Elizabeth Bishop wrote terrible first drafts, then there’s hope that with time and effort my ugly little poems may one day be at least presentable.

I try not to remember that she spent 20 years revising The Moose.

1 Actually, it’s still sitting in the bottom of the mailbox, since the next pickup isn’t until 6:30 tomorrow morning, but, metaphorically speaking, it’s on its way.